Another big day for the Boat Acquisition Team, concluding our efforts to find, purchase and transport 2 mud hoppers to our canals.

An 05:30 start from Stroud saw us heading north up the M5/M6 to Etruria, Stoke on Trent, where last week, we moored two 50ft mud hoppers for collection.  The journey went well, very well in fact and we were on site at 07:50.

To our great delight, the guys at Black Prince had obviously been busy and had pumped out all the tanks and bilges leaving the two hoppers sitting dead flat in the water - nice!  All the pumping kit we had loaded into the car was now not needed. 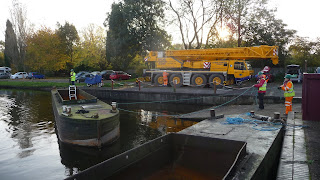 Soon after, above the trees, there was the unmistakable outline of a large yellow crane, shortly followed by the lorry.  Deployment of the crane was efficient, during which the first hopper was hand hauled to the loading point.

The lifts went well.  Our local haulage company, Ellis Transport, had them stacked on the trailer and firmly strapped down. 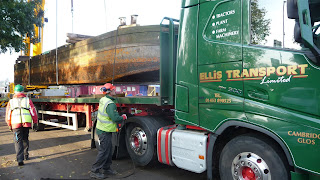 Amazingly, the job was complete and we were heading back to Gloucestershire just after 10 o'clock.  Good time was made, but on the odd occasion, the hoppers were travelling slower on the M6 than during their time trundling down the Caldon canal! 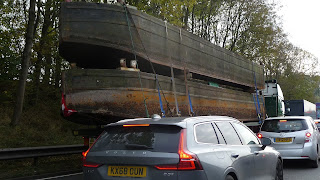 Another major transport operation was underway back at base, where Augustus Gloop was being returned to the water at Dudbridge.  Our destination was the same yard where one of our hoppers was to be dropped off in the canal, using their crane.  By lunch time, we were on site. 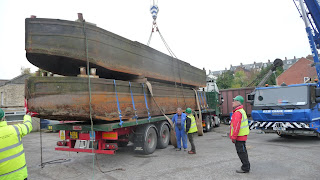 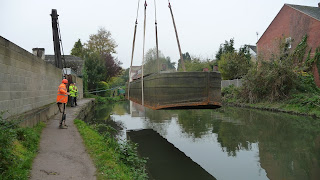 That lift went smoothly and the tug team merrily pottered off with their new hopper. 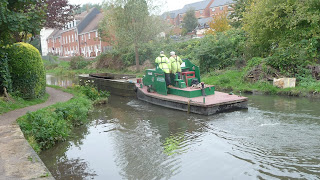 Phase 3 of our operation kicked in, with the assembled crane and lorry heading off to the Thames & Severn Canal at Thrupp, or more accurately, besides Stroud Brewery.

The lift location was in the grounds of Tudor Rose International, they had been most helpful in facilitating the operation.  The canal here has received only cosmetic dredging, a few years ago, so the landing point was going to be mainly on a bed of watery reeds. 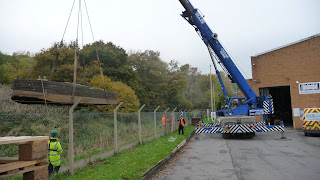 Over the fence, the second hopper went and landed in a semi-buoyant position ready for Alan J. and his team to take possession and commence the dredging activities up there. 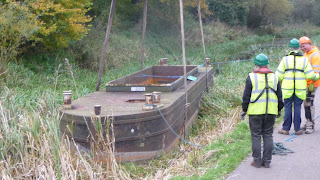 Throughout our time with this project, we have received excellent co-operation from Black Prince, Ellis Transport, Ellis Cranes and Steve Foster Cranes up at Etruria.  It made the whole experience so rewarding and enjoyable.

Finally, only one course of action was available, that of a short walk into Stroud Brewery for a fine pint of ale.  SDC's Thursday gang duly arrived and joined in.