A Grand Day Out?

One of the joys (and perils) of living in the UK is the ever changing weather. The warm days before Easter have given way to the last of April’s squally showers. Holy week’s misty drive to the yard was completed with the paradox of visibility ahead no more than 40 metres and that above of 93 million miles as the sun fought its seasonal battle to burn off the morning mist and fog. In such conditions it perhaps one of the few times when we chaps have to think about what to wear today. Shorts and tee shirt for the late morning and afternoon but ah, how many layers for the morning?

No such quandary for Thursday’s ‘Meet The Volunteers’ Event. Cool and wet with showers in between. Early into the yard just failing to beat the alarm with the code. The call out list went into auto and people who we have not heard from for were reminded that they once were at WD. Some forgot immediately as they settled back into that fabled instrument of torture - The Comfy Chair.

The van was loaded with some bits and pieces for display and the photos and notes for the display boards. Last but not least the Gazebo. Awkward and heavy, it was not going to co-operate but after three rounds it surrendered and lay quietly on the van floor.

At QEII park three gazebos already erected lined the grass at the edge of the towpath. A thoughtfully left space next to a WD installed bench was left for the WD display. With gazebo erected aided by Will from the woodwork team we hunted down the last of the display and the scarce and precious legs.

With Will shaking out his artistic side the boards were soon filled with photos of work done by the depot Volunteers whilst the heavier elements of the display were arranged. This is what we achieved.
Thanks go to Will for making the mower stand 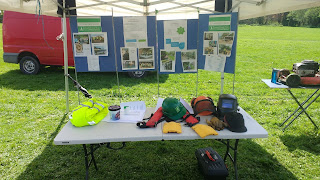 Anna Bonallack of Creative Sustainability, co-organiser of the event gave a short welcome address to the assembled throng thanking us for what we had done and expressing the hope that whilst this event might not be all that was hoped by those above us we would be able to take away lots of learning to improve the offer for the second event on 29 June this year.

After the speechifying we sat back and waited for the crowds to come and we waited and waited and … then we had lunch and waited some more. The weather had beaten our intended audience back to the warmth of home and hearth.
The lull gave us time for critiquing the event.
There was little advanced publicity.
There was no site manager; but with such small numbers of exhibitors not a real issue.
Those few who had ventured out for a towpath ramble had to ask what was going on.
Apart from the logos on the hi vis and on the displays there was no mention of CCT. There were banners from Cotswold Canals Connected.

The WD stand needs more work. Will, David C and I will review at the depot.
As the three hour event dwindled in the sharp wind views were collected by the co-organiser for the next version of the ‘Meet The Volunteers’ show. I understand that a short hot wash-up was conducted and we hope that a longer and more considered review will be conducted before the Mayday bank holiday.

My thanks go to Will and David C for their help on the day. 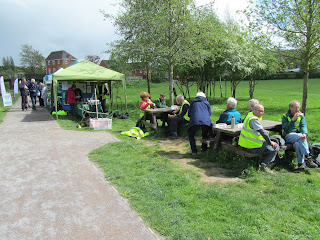 Lunchtime in the sun for the very busy Volunteers.
Posted by Peter Asquith at 21:08