Don’t shout too loudly, but we’re nearly there!

Wet dredging continued today with two regular members turning up at 08:30 to board Patricia.  With team briefing completed, and two stalwart dry boys conferred with, we positioned Patricia and waited for the Tug team to collect a full hopper and deliver one emptied early by the dry boys.  While we waited, we adjusted the neat fenders so that a hopper bumping alongside doesn’t destroy the 2 pack epoxy blacking.

Dave Pash. and the Tug Team today delivered our empty so tenderly, it was a joy to be there!  Later, Wookey Hole appeared at the lock en route to Ebley. Their new engine sounds lovely! 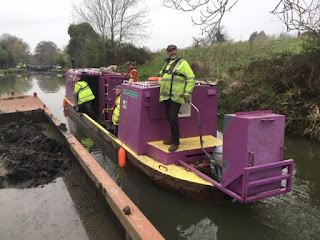 Later, just as we were winding up our day’s work, (hopper about half full after a lot of clearing up and unsticking loads of rubbish from the bucket) Wookey came back and entered the lock as Margaret (now spookily quiet) exited.

After pumping out all the rainwater and excess dredge water from the hopper, Dave Pash. and team moved the hopper away from us to allow us to return to our current “home” mooring.
At the end of today, we reckon we are less than a day’s work to complete the entry to Ryeford Top Lock.  Meanwhile Alex is close to gaining his “22b” endorsement for Patricia after a great day of progress. 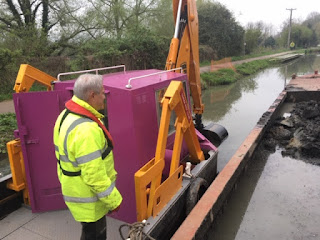 One dark cloud on the horizon is that the main jib ram is developing a fault. It operation is becoming very sluggish when all other functions are normal. This could indicate either a control block fault or even worse, a cylinder piston seal failure.
Posted by Peter Asquith at 22:51