An early start and a good crowd of 8 set about cutting and laying rebar mesh on the slope.   Rebar was bent in 2 directions to fit between the blocks and it was all wired together ready for the 11 am delivery of 11 tonnes concrete.  This very dry mix was shovelled, raked, tamped, levelled and given a final dressing.  In the blazing sun it was soon hard and we were unable to get the best finish but under the circumstances it is ok. 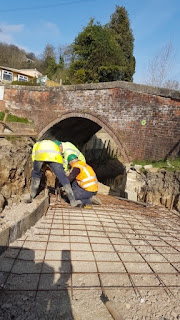 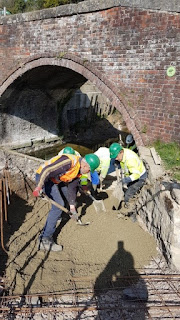 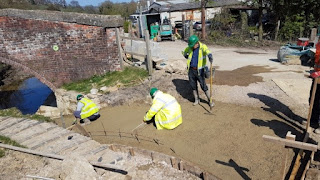 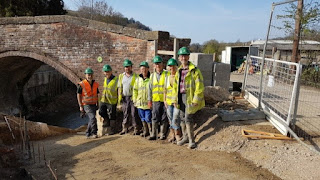 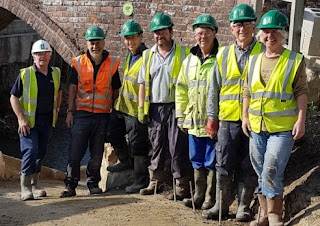 The 2nd dam has been removed again as we are not having anymore MD stresses.  Lost count of how many times it has been built and removed.  The BD did its usual, I am not going to work after dinner trick and was left for our regular outside assistance.  What a difference a dam makes. 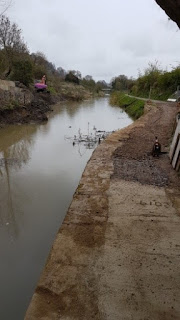 The coping stones around the bridge were replaced and mortared in place. Neighbour Bob (the lock keeper) and his very special lifting tool, along with and our Bob got everything lined up and fitted.  Another big job completed. 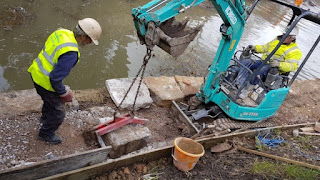 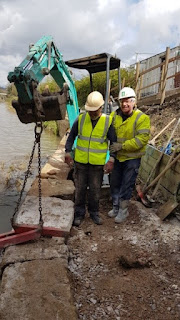 We tried to fit the recently purchased hammer breaker to the MD but it does not quite fit and the hydraulic pipes leak.  Therefore, we had to revert to a sledge hammer and chisels to break up concrete from the old walls, which we barrowed into the tow path behind the coping stones.  Then type 1 was barrowed on top to give an almost completed tow path.


Dave C and Frank joined us for a late lunch and it was good to catch up with some WD exploits.  At some point lots of hands descended onto the forlorn and dishevelled MD after its muddy inclusion.  A high pressure washer and fittings were produced and mud blasted away from places you cannot image that were covered in mud.  At least now it looks better but still bruised in places 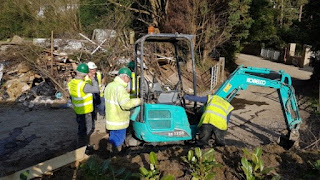 A few more details emerged (allegedly) about the boat waiting near the lock.  It is over 100 years old and was used for salmon fishing on the river Severn.  The punt was once a common sight on the river. Through the ages its shape developed with a rising bow and stern particularly on punts built for use in the tidal reaches of the river, where they were used extensively in connection with long-net fishing of the salmon. 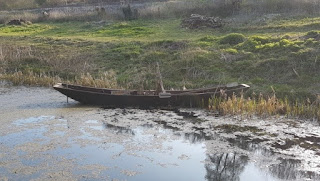 Only two of these boats remain - both built from lines passed on through many generations.  It was constructed in the 1910s by Prossers of Minsterworth, wheelwrights, agricultural blacksmiths and carpenters.  One boat was built for Tom Greening and is now in storage at the National Maritime Museum, London (in poor condition), and is well documented in "Working Boats of Britain" by Eric McKee.  Its sister craft, built for Anslem Browning, fished at Bollow Pool until the 1980s when the fisheries became uneconomic through the decline in salmon stocks.  There it remained on the river bank until 1998 when it was restored into working condition.  A nice bit of history.
Posted by Peter Asquith at 20:32