For 4 of the last 5 Western Depot volunteering days you may have noticed that the Logging Team has been conspicuous by its absence in the mornings.


You haven’t? Well we have been, honest.  This was all thanks to Les P - who very kindly donated a felled sycamore tree to us but only if we could be bothered to go & collect it.


Always on the look-out for supplies we said yes like a shot and got quite a shock on our first visit to Les (who lives on the side of a (probably) 1:4 hill outside Uley) where we espied this 100ft long, 4ft diameter tree lying there facing straight down the hill towards the busy road.


The Mitsubishi coped with the first days’ ascent of “Parsons Piste”, no problem, and we removed 3 full loads.  However, then it rained. This made the following Monday’s attempted ascent all but impossible even with the assistance of Les’ quad bike - so we used said bike to ferry the cut wood down to the Mitsubishi instead.  Another 3 full loads removed, but then it rained some more so we didn’t even try last Wednesday; instead we spent the day splitting roughly 2/3rds of what we’d already collected.


Last weekend was glorious so off we went again on Monday for yet another 3 full loads, after which we were left with what was potentially the most challenging bit: 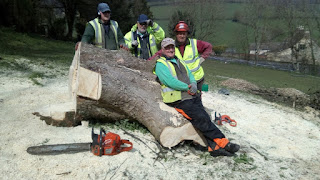 Now then. To give you some idea of the diameter of the wee beastie at its base, bear in mind Maurice is a big chap and he was standing firmly on the ground, as was the tree trunk.....


Wednesday dawned so Maurice, Mike, Derek & I ascended the dizzy heights of Parson’s Piste for the last time.  Chainsaws at the ready we cut here, there and everywhere; all into manageable pieces, resulting in another 2 Mitsubishi loads. “Job’s a good ‘un” as our sorely missed colleague Lionel used to say, all we’ve got to do now is split it.  The 11 loads should be worth well over £1,000 to the CCT in sales revenue.


You may be wondering why ‘only’ 3 loads each time?  Simply because we were totally knackered by the time we’d loaded No.3!


Thanks, Les, for your generous donation, just let me know when you want any other trees removed as we’d be delighted to take them off your hands.....
Posted by Peter Asquith at 10:24