A very cold Monday morning started with the water bowl frozen inside the amenity cabin.  The ducks though were happily ice skating.  4 pallets of concrete blocks arrived and a plan hatched to get them lowered onto the concrete from the truck.  This did not work as the hoist ran out of reach. 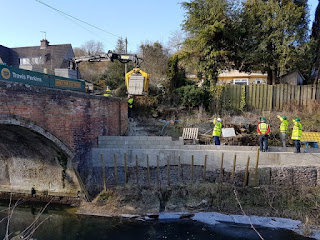 So, each block was lifted and slid down a chute and then carried and stacked along where the wall will be built. We did get warmed up though and it kept the ducks amused. 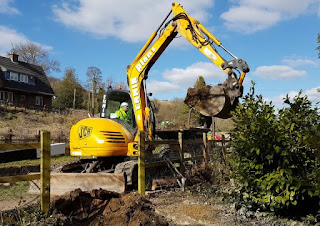 A relatively large digger arrived and was put to work digging an up to 2m deep trench for the new spill weir pipe. The spoil being taken away and used to build up the dam across the canal. This  continued through Tuesday and Wednesday in spite of the bitterly cold weather 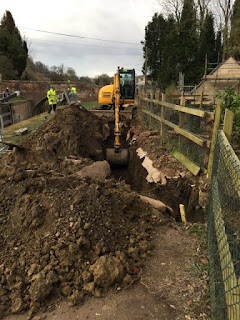 A pedestrian convoy system was in use to get the walkers, runners and cyclists around the excavation.  An additional set of fencing had to be installed in case someone fell into the lock 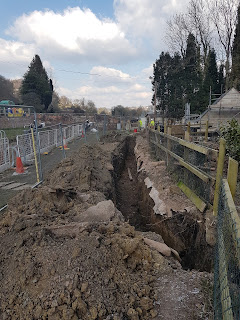 The 600mm pipe is due to arrive next week but unfortunately most of the bends will be delayed.

If no one knew this then hard hats do float in the canal.