The Morning after the Night Before


And so to the Western Depot on a cooler, more grey morning and there standing proud above the new beach was Patricia. Resplendent in her newly painted battleship grey hull all that was missing was the pennant number D6 painted near her bow. A moment’s reverie crept in with a vision of the boat’s team mustered on the quarterdeck, the Bosun at the gangway with his call waiting to pipe the side and the Yeoman at the mast waiting to hoist the Commodore’s pendant to the yard arm. In the background the massed bands of the CCT (kazoo section) was playing ‘When I was a lad’ from HMS Pinafore by Gilbert and Sullivan to greet the project manager as he arrived to mount the gangway and inspect his team. 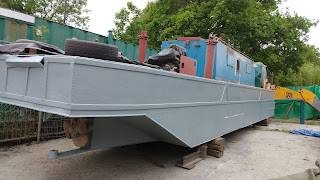 A good finish by Patricia’s team of helpers

A cry of “tea’s made!” broke the spell and it was on to the day’s briefing.  A smaller attendance today befitting the cooler weather.  Tasks allocated; small groups left to collect a bench for repair from Saul, to raise the pole for the solar panel at Gough’s Orchard and to lubricate the lock paddle gear at Blunder and Newtown.


At Newtown the team started a bonfire to dispose of a mound of clippings and weeds removed from the canal. The fire was reluctant to burn and  started to smoulder.


They then investigated the fastenings on the lock gate walkways as these are to be replaced as they have started to rot quite badly in places. Finding that the nuts on the bolts nearest the lock wall were seized in place plans were discussed as to how the timbers could be removed whilst still retaining the bolt holes intact. Back to the yard to collect some more tools and the grease for the operating gear. Returning to the lock after a short sojourn in the new accommodation they were greeted by the sight of the first two planks already removed by our carpenters. It was with a little gleeful smile that the chippies explained that the only two bolts they had trouble removing were the two tested earlier and the rest had all but fallen off.

The planks were used as pattern for the new planks. After lunch, which was taken to the novel musical accompaniment of a planer and electric saw rather than the usual grinder the new planks were taken to be fitted to the gate. This was accomplished after some onsite adjustments were made. Large hammers were not required.  As ever with jobs on the canal lessons were learned and will be applied to the reaming three gates

And all the time the bonfire refused to leave its hiding place and sat sulking and smouldering, lost in its own world.

The afternoon threatened to become sultry but the sun sat sullen behind the veil of cloud refusing to come out when expected and the day began to drift away drawing the volunteers behind it.
Posted by Peter Asquith at 08:22