Happy to have left dredging to the dredgers at Ebley, last week Samson was man-hauled from Chestnut Lane Bridge across two underwater obstacles and all the way up to Bowbridge, as reported recently on these pages.  Usually operating the locks is hard work, but after pulling 40 tonnes of barge, it is a comparative respite.  The team started at 9am and were there by 12:30. 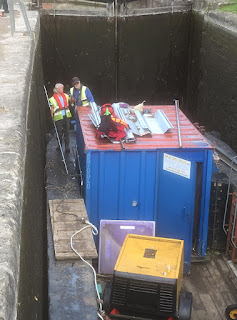 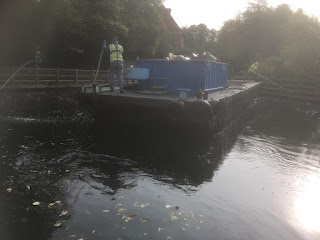 A good start has been made to the build of the landing stage west of Bowbridge Lock, at the nearest bit of nearly-straight bankside.  With the stone wall supporting the towpath to a vertical edge, the platform construction is all off Kon-Tiki, our papyrus raft, and with the base of the steps also being under water, we placed sheet piles to contain the construction.  When the job is finished, they will hardly be noticed!

One sub-team got busy mixing mortar and rebuilding the upper part of the wall, to towpath level, and backfilling behind by cementing-in rubble.  Others were drilling the sheet piles to bolt brackets fixing the sides to the end, in a fairly confined space. 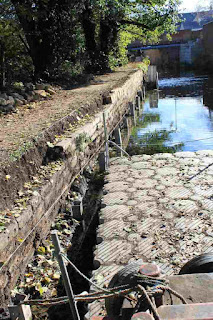 All ten rear OBB piles then went in, the line as straight as possible along the “canal-straight” wall.  We were lucky not to have been much affected by stones or other debris usually found at the base of a wall.  This stage being in support of a lock means canoeists get out and carry, so it has a low bit for their (dis)embarkation convenience, hence the pile height variation. 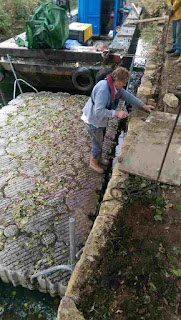