Now for something completely different 3


We returned on Tuesday to try and finish the fence, with 8 posts to be fitted. The evil post machine constantly tried its best to spin Bob around the bushes. Trying to dig holes around trees, bushes and favourite clematis plants, on very uneven ground, proved slow and very hard work again. More bank clearing, old fence removal, old wall discovering and trying to keep things level kept us going all day.


Dino the really big barking dog only broke from its chain once today and was quickly re-tethered after only a few playful nibbles.


Some holes were really tough to get the correct depth, due to the amount of big stones deeply buried. Exhausting work.  No idea how many loads of concrete were mixed, wheeled and hand shovelled, but it was a lot.  Finally, to the accompaniment of trumpets, the last post was sounded and installed through a bed of rubble which still fought to the very end. 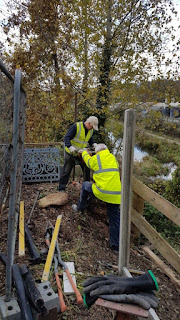 The 2nd gravel boards were lifted up high and slid into place and then the final wood panels were fitted, just before darkness set in.
Agh, we were 1 panel short, as we had managed to create another gap along the twisty road from hedge to hedge.  Mighty pleased that was done.  Just tonnes of soil now needed to back fill the garden.  But that’s for another day. Weary bodies need to rest.
Oh and not a barge, dredger, hopper, tug or any other floating device has been used or modified for this work. One will be needed later. 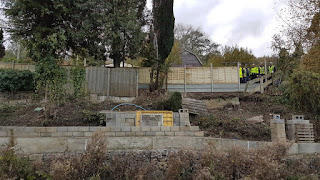