An early start, with a healthy number of people and still lots to do. 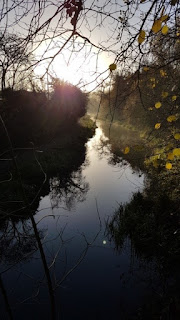 Bob cutting blocks to make the wall height level and Duncan and the little helpers, began to make some steps from the wall back up to the road. 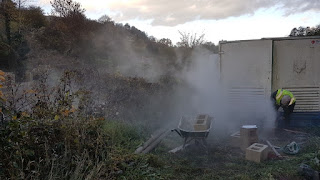 Will and Ray arrived with the infill fence panel and made a fine job of filling the gap.  We cleared a route in the garden, by yet again moving all the pots and plants, so the dumper could get in with 2 very large loads of crushed stone (trade description I don’t think so) from the 20 tonnes delivered this morning.


This ‘stone’ was hand shovelled along the new back fence to start levelling off the garden.
As we had the mixer going all day, the walling continued until almost dark. 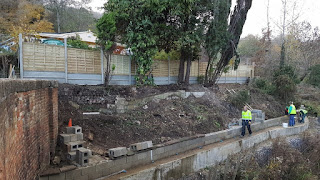 Ray brought a pack of mince pies and we all commented about it still only being November, but gleefully consumed them. Thank you.

Thanks to all Bob, Maurice, Duncan, Mathew, Derrick, Andy
Posted by Peter Asquith at 18:23