Margaret met up with companion Wookey Hole again today - this could be start of a pleasant habit!

We joined forces at Ryeford Locks, both boats going down in tandem and with Weedie joining in the fun.  And fun it was – the bottom gates wouldn’t close! Well, one would, and the other got within about 3 inches of closed and refused to get any closer.  Folks from Wookey, joined by folks from Margaret probed about the bottom of the recalcitrant gate from Wookie Hole with poles and kebs and didn’t find or move anything.  So we enlisted yet more help and borrowed the dredger team’s long keb.  With this we could reach the bottom, and scrape along the cill in an attempt to move any obstructions. We found lots of humps and bumps, but still didn’t obviously move anything.  So we opened the gates and closed them again (a time-honoured tradition when they’re not cooperating), and lo!  - one closed and the other didn’t.  Only this time they were the other way round.  So we probed and scraped again and opened the gates and closed them again.  And this time they both closed with a welcome ‘bump’. We went through the locks again later with no problem, but we can’t help but feel there’s something down there waiting to catch us out in the future.

Margaret, as always, performed well, managing to move a hopper for the dredging team while all this was going on.  The trip also exercised her cooling system after fixing a couple of issues last week.  It’s definitely working better, keeping the engine at the right temperature, but there still seems to be more to do.  We’re keeping an eye on coolant levels and potential air-locks for the time being. 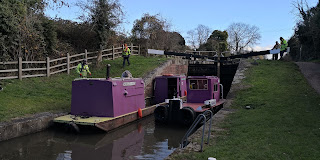 The photo is from last week (thank you, Iain) showing Wookey Hole and Margaret about to descend Ryeford Lower Lock.