Ham Mill March 25-28th 2019
by: Andy P.
Monday continued with a whole more concrete mixing and wheeling down the slope to cover the pipe and rebar mesh.  Mathew, growing extra muscles as the loads are now twice as large as the big mixer now in use.  By weds am the 40 bags of cement were all used.  The final surface was made under the bridge with some type 1 added for extra measure. We even had a small section sloping upwards now. 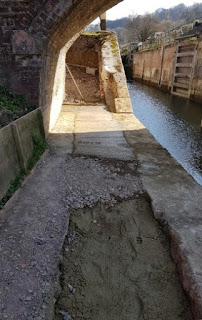 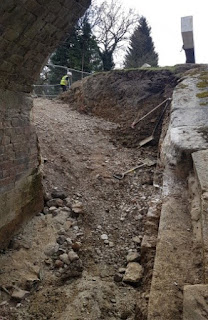 A rebar bending tool was brought into good use as several test pieces were made. After a lot of measurements and calculations, we now know what sizes are needed for the slope. We also calculated that 4.5m3 of ready mix will be needed to form the base path and foundation for the blockwork. That’s a lot of shovelling still to do.

Bob H and visitors arrived for a look around the site and workings, which was good to do. 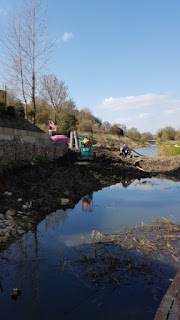 The dry weather meant it was easy to walk on the car park and around the area however that was not the case on the other side as we continued to build a path way for the MD.  The mud is horrific stuff and the MD succumbed to its grip.  The rest of the day was spent trying to get it out.  BD could have been used but it would not start again and the dumper also got sucked in.  Now we are in a pretty pickle.  No matter which way the MD turned, no matter how many rocks, trench plates and digging it just got worse and had to be abandoned for the night. 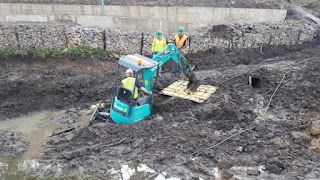 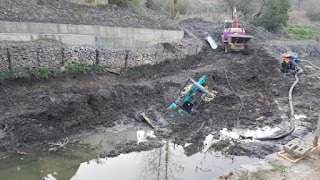 Thursday Jason, Duncan and Andy J dug, dragged, pulled, lifted, swung, pulled some more until it finally was released.  However, the repaired but still very sickly BD got stuck as well.  Oh dear Oh dear.  By the skin of its teeth it hauled itself free to much cheering from the crowd including Reg and Jim.  Then MD finally made it out-what a machine, as it fired up every time despite the stress it had been through and the stresses it passed on to all of us. 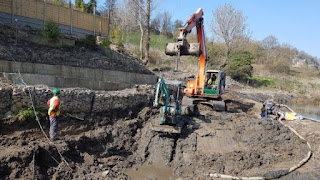 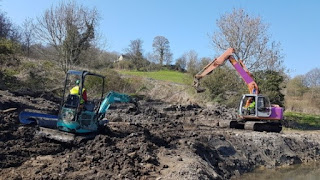 We are really all an unhappy bunch to have got into this predicament trying to do a good job.  Time for a rethink.