An interesting start at 8am as the truck arrived to collect the 1 tonne trench box.  A tipper truck and no lifting equipment.  What are we supposed to do? Bob came up with a cunning plan.  Dismantle it.  The mini digger took the strain as the leg pins were eased out with a lump hammer.  More digger manoeuvres as the sides were grabbed and lifted on the truck, twice.  Excellent improvisation. 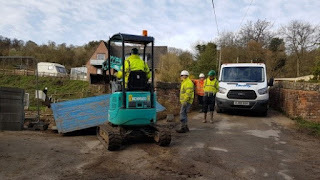 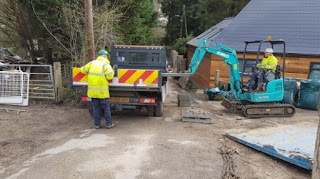 A mortar mix for Bob as he laid more bricks around the pipe outlet.  Mathew having to multi cut every one.  Slow and steady progress. 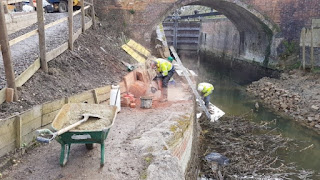 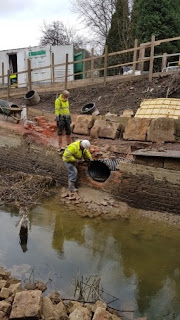 Duncan on mini digger graded the slope, but the Ham mud nearly got the better of him and the dumper on several occasions.  The excess being used to build up a bank near the amenity cabin where the last 5 laurel tress are being planted. Maurice was banksman and on essential traffic duties, as the tow path was opened and closed and moved about a bit most of the day. 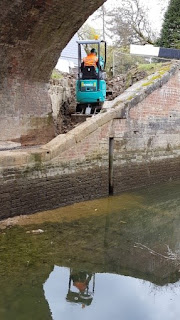 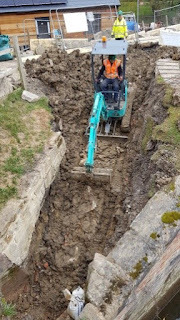 Richard and Andy on neighbourly gardening duties to add a few more finishing touches.  We do get biscuits in return.  Dino the big fearsome dog, not even moving and there was a small hint of a tail wag.  Cracked it.


Numerous visitors today but not much time for catching up but John F and Ian M came to start the big mixer in readiness for the monster mixes we will need. We had tried the opposite of the utube video and Mathew got in spluttering into life only for it to splutter to death and stop.  John failed and the mixer is still dead.  We did pick the brains of the engineer who had just fixed BD so we have some options-ready mix might be one of them.  Hoorah. BD now back up and running but still needs some more TLC.


Let’s make some concrete was heard, so 3 mixers were wheeled down the slope and bucketed into the wall space behind the pipe.  It seems like years ago we started on this pipe, it was in fact Feb 26th 2018 but at long last after a very long delay and then so much work and effort, it is safe to say the pipe in now finished. That is apart from all the concrete to go on top of it, but that’s another story. 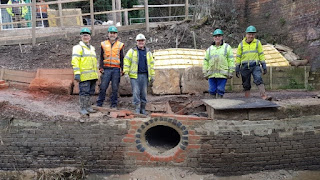