On a really cold day 5 folks, Bob, Duncan, Mathew, Richard and Andy started on the day’s jobs.  First one being a safety inspection, from which a few things to do and remember, were highlighted.


Duncan used BD to raise the dam as there was a danger the water would flow back into our pond.
Bob used the disc cutter to help us take the wing wall bricks out, one at a time using traditional tools.  That is until Dave C arrived with the modern day breaker-far better.  Individual bricks then being taken out using the arbortech- even better still.  Eventually we reached the water level and were able to stand in the canal using the waste brick platform we had built up. The dimensions all around being checked using a spare piece of pipe. 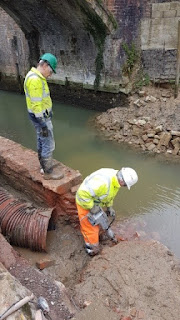 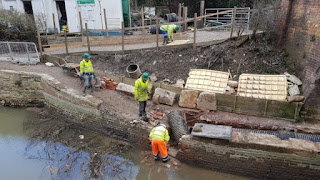 The last piece of pipe was cut and correctly angled and made ready to be fitted. Out first mortar mix for a long time was made, as Bob laid the bottom courses of bull nose bricks, as this will be the only visible part of all this work.  Nobody will know we have been here.


Visitors today were Jim the boss, Alan Jones and Mike Hughes, so lots of discussions about misunderstanding sheet piles, landing stages, trial pits and even timings. Marvellous.  The canal was being widened until BD fell ill again and stopped altogether.  Think it needs some TLC.  Quite a lot really.


A delivery of cement, sand, gravel, blocks, rebar and mesh, blocked the roadway whilst it was all unloaded.  It’s good to see some above ground materials so we can get out of this stucking mud. 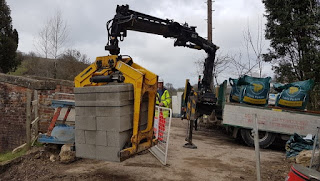