Cutting and 90 degree bending of the reinforcing mess to wrap around the pipe under the bridge. A clue is in the description. All sorts of heavy duty bending tools were brought into use and we even managed to break many of the welds. Amazing what can be done with scaffold poles, wood and pick axes. The mesh was then placed over the pipe to await its fate under the concrete being readied


A mortar mix was made for Bob, so he could continue with brick laying.


Duncan dug a trench and fitted the water drainage pipe on the opposite bank before moving to the mini digger (MD) to again grade the slope down to the bridge. 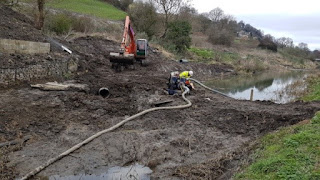 Mathew and Andy spent most of the day mixing and precariously barrowing concrete down the muddy slope to pour over the pipe.  Lots of tamping to get it under the pipe. 15 loads and 1 meter done. 6 m to go. Do the maths. Gulp. 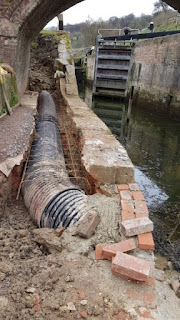 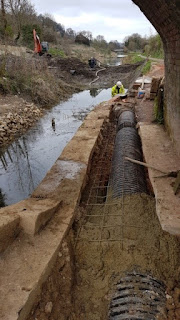 Buffs , Colin and Geoff (Thank you all ) arrived with the fuel bowser and we put over 200 l into the MD, BD, dumper, generator, pump, and every can we could.  A BD fuel leak put a stop to this as fuel was removed.  Lots of looking and ideas to solve the problem but BD still after TLC.


The generator also was found to have a leak in a red flexi pipe.  More looking and ideas and TLC needed. 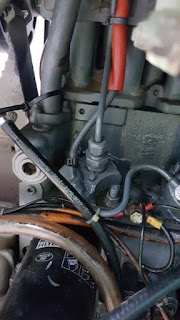 Late in the day Bob again looked at the big mixer, drained the fuel and fired it up-no still dead. Our helpful neighbour and temporary landlord, with spanners, helped out with dismantling fuel lines and fettling. Then 3 spins and it not only fired, it ran and kept going. Marvellous. A change of skills sets for the ham millers.