With just 2 pins now remaining, the hope was to get them both shifted today.  The access is either difficult, or nye impossible. Working from the top down, because the oxygen monitors were off site, the starboard pin was tackled first.  Here, we could see that it had not seized and so stood half a chance of shifting it. 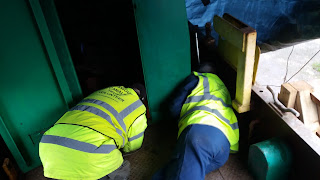 With a team of three, we succeeded, however the last pin was to thwart us.  Some time was spent trying to remove a section of flooring to improve access.  When a section of trunking was released to assist in this process, we found evidence of previous ship occupants. 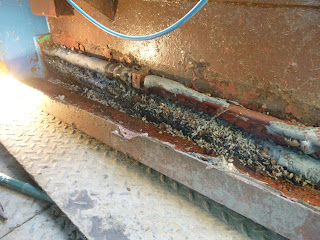 In the workshop, consideration was being given to the re-bushing of the leg beams.  Laying one side out on the floor helped the process. 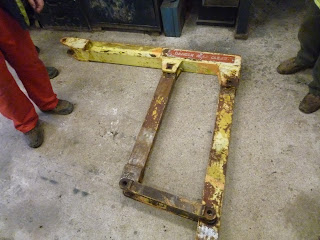 A visit from our friendly hydraulics man should guide us into understanding the level of restoration required to the four cylinders.  Work on the JCB parts will also be necessary as a spot of rust in the wrong place which could damage the seals was noted on one of the jib rams.