Hopefully Not a Sad Ending


During the set up for the naming event we were pleased to see the duck family on the pound between Blunder and Pike. The ducklings had clearly grown in confidence and were swimming at greater distance from mum than on Monday. 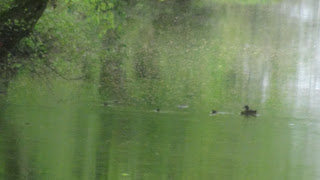 A long shot of the family in the shower before the event shows four of the 8 ducklings out with mum in the morning.

At the end of the day when I went to try to get a better picture I saw a duck straining in that erect Jemima Puddleduck pose clearly looking for something. She entered the water and slowly progressed from Blunder towards Pike looking at the water’s edge and quacking quietly in the manner of a mother duck calling her brood together. There was no response either in chirping or an emerging duckling.  She did look a little forlorn.

If you are on the tow path between Newtown and Pike look out for them and let us all know if you see them.

Nature is nature and the fight to protect young from predators goes on.  Whilst I was on the bank above me was a loud dogfight between a rook from the Pike Lock rookery and a buzzard.  The buzzard was being driven off but I’m  sure it will be back