What felt like the first real day of spring saw the yard filled with hi vis waist coats.  Gone were the heavy winter coats and bright was the head gear of at least one stalwart of the team.  If Wednesday’s forecast is to be believed we look forward to bright red heads and faces by the end of the day.


Today’s big task was to move Mole from the yard to her home on the water.  But first we had to move the water on Mole.  When the bottom boards were lifted there was rain water to the top of the frames.  The small whale pump was put to work while the electric pump was brought out.  After several false start the pump responded to the cajoling of the team and being primed with half a bucket of water.


Followers of the blog will know that a tilting trailer for moving our small workboats has been under construction in the yard.  Today boat and trailer were finally introduced and brought together. 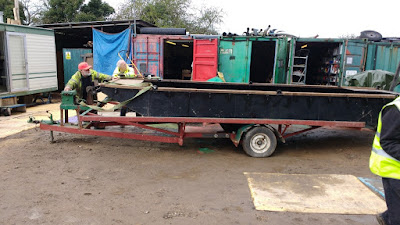 Boat and trailer were brought to the slip by Pike lock.  The trailer was reversed into the water and tilted.  Mole proved very eager to return to her natural habitat and raced into the canal to be brought to a halt next to her sister Ratty.


Later in the day the new cover for Mole was fitted for the first time on the water.  Many lessons were learnt and will make future fittings more flowing.


Ratty has lain open to the weather for longer than was expected and was beginning to look a little sorry for herself.  She is indebted to Jill and John who spent much of Saturday giving her the TLC she deserves. 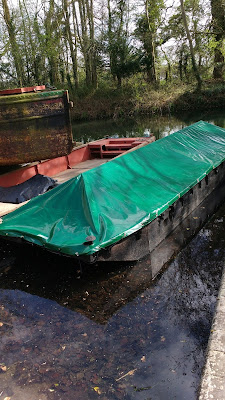