The Sun Shines on the Western Depot
by: Buffs


A dull start to the morning belied the rending of the clouds of winter asunder by a bright and almost hot sun before elevenses.


Depot manager Reg read out the day’s tasks to the assembled volunteers and closed with a serious note that WD has a large and growing list of tasks which always seems to outstrip the increase in numbers of volunteers coming to the depot.  The summer programme of grass cutting and bank maintenance gets underway with the advent of the warm days ahead.


The yard was soon resonating to the asynchronous beat of hammers underlying the wailing song of the grinders and cutters.  A descant from the chippies saws and routers joined in the response to natures more melodious offerings.


Western Depot has a goodly number of mowers of varying vintage alongside an even greater number strimmers and hedge trimmers from equally diverse sources.  This year with two dedicated volunteers devoting most of their time to the task, preseason maintenance has been carried out on most of the mower fleet.  Some mowers have required more time and spares than others but the mowing team can set to work with machines in the best state for a while. 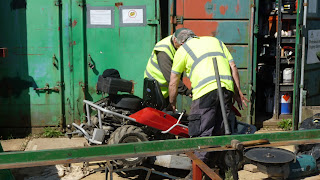 I would take this opportunity to observe that mowers of all types are more efficient and effective if they are kept clear of grass cuttings.  Cuttings accumulate on the underside of the machine and need to be cleared regularly during the working day and before putting the machine to bed for the night.  A 1 inch scraper is an excellent tool to keep to hand as it can get to most places under the mower.


A small team were sent to Dudbridge Locks to clear bramble on the island. Brambles were beaten back but not until they had staged a vicious defence which saw at least one volunteer wounded.  Sympathy at the depot was expressed in the usual manner.


The digger was taken to Harper’s field to remove a small stump at the water’s edge.  It finally yielded and revealed itself to be 2m (6-7 feet) in diameter. This may be the subject of a post elsewhere.
Posted by Peter Asquith at 21:46