The summer warmth of last Wednesday gave way to a cooler Sunday followed by Monday’s reminder that spring has been coughing into life.  The canal between Blunder and Pike locks was covered in buds and petals thrown from the trees.  In the distance above Blunder came the first sign of the avian response to the changing season.  A smudge on the water surface resolved into a squadron of very young ducklings following in line astern behind their mother. 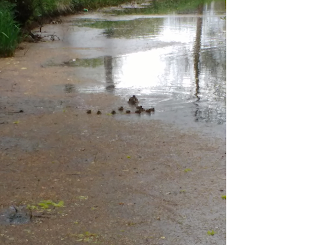 As with all small ones the sense of order was soon lost and mother was shepherding them along the water.


A relatively small turnout today with Patricia taking a goodly chunk of the volunteers.  Work on the big trailer was in abeyance as the screen for the bypass at Dudbridge moved up the order.  Further measurements were taken and the design for the new grille is being confirmed.  Getting to Dudbridge was longer than usual with the closure of Cainscross road this morning.  Our thoughts are with the family of the unfortunate cyclist.

Closer to Eastington final preparations for the formal naming of the new workboats on Wednesday were progressed.  The soon to be renamed Ratty and Mole were taken to Blunder lock where the naming event will take place at 10:30 on 25 April 2018.  The boats were cleaned and the bottom boards for Mole were re installed.


The boat cover made by Attwoolls was trial fitted to Ratty to make sure that there were no differences between the two boats.  There were none and Ratty will get her new dress soon.  After the renaming event Mole will go into service and Ratty will return to the Western Depot yard for the finishing touches to the engineering to be applied.


Both Ratty and Mole have seen service on the canal even in their raw state. Both boats were pressed into service over the Christmas holidays when the WERgies needed on water support for their tree surgery exploits.  The boats provided very stable platforms and were much in demand.
Posted by Peter Asquith at 08:09