And now for something completely different

Leading on from the previous blog, we have the further adventures of Flea. Written from the perspective of Weedie, which today was a breakaway from the tight knit group that the Boat Team has been recently.  Weedie joined Flea in their ascension of the locks to the upper reaches, into the Thames and Severn no less.  I understand the rest of the Boat Team united one of our team with his newly purchased dinghy, which you will have seen on the shore of JayBees yard. 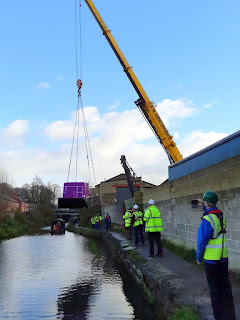 As it was reverently lowered into the water, Flea looked splendid in her new paintwork. Until Ian put his muddy boots all over it.  His  ‘Well it is a workboat’ received little sympathy from the attendant crowd.  As Flea’s engine has not yet been fitted, we offered them a tug, it’s what we do.  Their polite refusal was understandable.  They wanted to play with their new toy without interference by strangers. 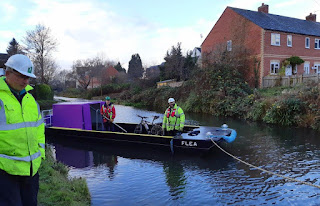 By now, the ailing Dudbridge Lower lock had finally drained and the adventure really started.  The lock filled a lot faster than it drained and we were soon off to Foundry lock, some with more effort than others.  It wasn’t long before the gate opened onto the pound.  The joys of bow hauling were now receding fast with the SDC crew, and a cry of ‘Do ya think that tow would be possible’ was met with enthusiasm by the Weedie crew. 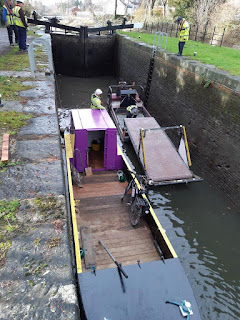 The simple method of tying two ropes to the front bollards of Flea, and running them forward to be held on the rear handrail of Weedie by Nick proved most effective.  The combined teams now progressed harmoniously up the cut.  A really nice example of working together.  We did all the hard work (well the engine did), while the SDC crew had the easy task of opening the bridges and locks.  One funny bit was approaching Wallbridge Lower.  With one paddle fully open it brought the convoy to a dead stop.  We were just making headway again, when opening the second paddle actually sent the convoy backwards, even on full power. 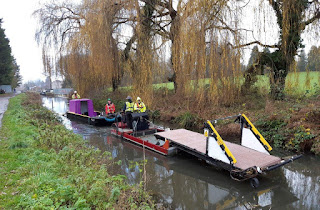 Soon we were going up in Wallbridge Upper to be greeted by Lisa, Gemma and Clive from the Wallbridge centre, offering tea and biscuits.  Be impolite to refuse so we retired there for lunch. It was nice to be in the warm for a bit.  After lunch we made short work of tying the boats up just above the lock.  With much congratulations all round on Flea’s first voyage, we all set off for the considerable walk back.  All in all quite a different day, but it’s never the same is it. 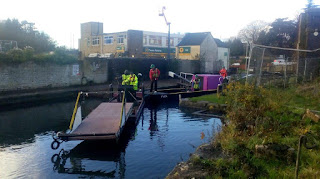