Bob continued in the spill weir to try and finish the bypass ring. Almost made it by night fall as the top level needs to be raised and most bricks had to be cut to match the sloping sides of the original.  A tricky job but it is looking good.

A bit of a wait until the mini digger arrived then Duncan set to moving soil up to the slope where Mathew and Julian pushed, scraped and dug the heavy soil across the slope. 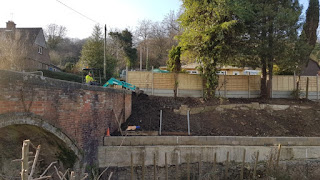 Ron joined us and prepared a pile of soil ready to be moved at the other end of the slope.  He also fixed a hydraulic leak on the big digger-thank you.
Steve and Richard supplied us with the digger, oil, fuels and more Brimscombe bricks.

A dumper load of soil was moved up to the garden to level off the ground now the rain has settled it down. Dino, the fearsome dog, almost wagged its tail in delight.  We even managed to fix the very nice notice board so we could see what we were doing! 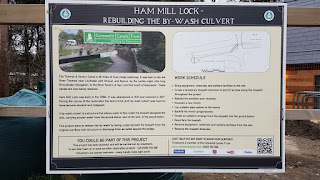