Whilst searching for an old photo, the images below were stumbled across.  It was, according to the file dates, about 10th October 2004 and the ambition was to recover a sunken boat from inside the eastern portal of Sapperton Tunnel.  The rain and roof drips had filled the boat and the inevitable happened.  At least it was chained up to the wall, so we knew exactly where it was. 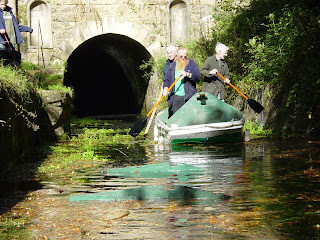 I had arrived on spec' not being a regular volunteer of the day and things were going on.  Having something that resembled work gear, I crashed the w/p and lent a hand.

The trip boat of the day and an inflatable had to be used to reach the boat as there was a good water level in the cut.  If you look at the above picture, the sunken boat is visible as it just cuts the surface in front of the trip boat. Once emptied out, it was winched up onto the bank. 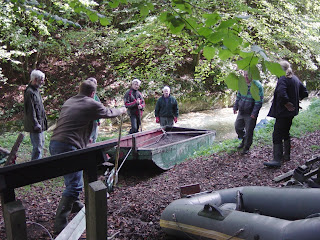 Now, not knowing anyone at the time - can the party be identified?  I'm pretty sure more than one of you were at the Western Depot dinner yesterday. 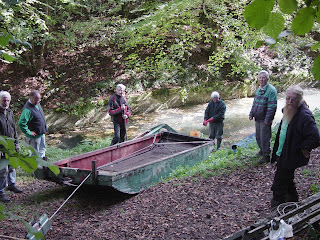 It is pleasing to report that everyone survived and had dry socks, despite the PPE not being quite up to present day standards!

It is quiet times for activity over the Christmas/New Year break.  So, if anyone has a similar blast from the past and would like share it, please send it in and help stir the old grey matter.
Posted by Peter Asquith at 17:43