A horrible day weather-wise but there was a clear window in the morning for a couple of hours.

One crew took Margaret out to the Ocean.  Water levels and lack of weed make this possible with difficulty.  Apart from practice and keeping the canal open, the main purpose was to watch the coolant system for any sign of leaks or air locks. The coolant system is still not right.  An erratic temperature gauge and excess pressure in the system may indicate an air lock.  The enthusiasm of the crew is to be commended.  They apparently arrived back at base about 2:30 soaking wet from the rain.  I was alright, I had already been in the pub for about an hour, keeping a watchful eye on two senior members of the Boat Team, who seemed intent on a bit of a session rather than venture into the rain.

Meanwhile, Weedie had manged to get all the way up above Bowbridge lock. They told us there was weed up there, tons of it, but we didn’t really believe them but we do as we are told.  Guess what, there was tons of weed up there. All along the stretch that has only just been dredged. In such a short time and in the middle of winter. 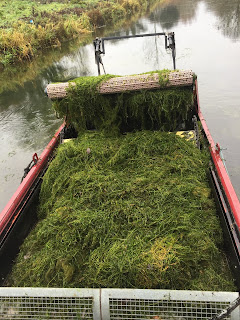 Weedie took out 3 loads similar to this one.  The crew reckons there is another two days work up there.  Incidentally, they reported that the lock gates sealed pretty well.  If you still wondered if Weedie is capable of doing a good job, this picture should convince you.  The mesh is still hanging together, albeit with a few more repairs.  We have worked out the way to use it and we are now getting experienced crews on the vessel.  Turns out it was a good investment after all.