A38 Whitminster Roundabout - CCT working in Partnership(Phase 1B)
by: Dave C.


It was Monday morning when 2 pick-up loads of CCT volunteers and one pick-up of Stroud District Council personnel descended on Whitminster Roundabout.  CCT had been asked by the Contractors via SDC to help clear the centre of the roundabout of some of the trees, specifically those that obstructed the way for equipment to dig the new canal.  As most of you would imagine, working in the middle of roundabout involves multiple permissions and agreements, as well as working under the rules and regulations of Agencies.  So having had a brief at the depot, a man in a White Hat came and told us how to be safe and made us sign his form (he had a clipboard and everything), another chat with Amey's work supervisor to ensure we didn't get in each other's way and a couple of minutes with Geotechnical to check out their bore hole kit, and everyone was (almost) happy.  The traffic management people then turned up and put cones everywhere making us all very popular with the locals. 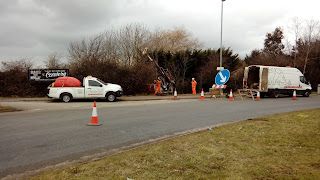 Dave P, Derek and Mike L set off with their chainsaws while Richard, Fred, Maurice, Ian M and John P (yes SDC personnel rolled their sleeves up and got on with the work). 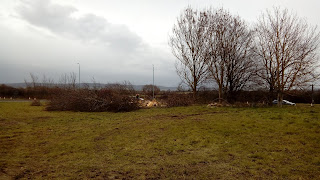 Soon after getting started, a nice man from Amey wandered over to see us to ask if we could spare some volunteers to clear the space for the bore hole machine.  Suitably briefed off went Derek and Richard with chainsaw and pole-saw to clear the way.  Back came the man from Amey to tell us he needed the brash and wood taken away, a quick scan of the task quickly resulted in the conclusion we needed reinforcements, so out came Buffer and Jeff in the tipper. Clearly the work was taking its toll on some, so a trip back to the depot was arranged at lunchtime.  As the amount of wood was quickly pilling up, we called for the tipper again and Steve C dutifully arrived and a ferry system was established.  With all the logging cut and transported we called it a day and went for a nice sit down.

Wednesday we were back on site and Ian arrived with the new toy , an industrial sized chipper.  After a bit of head scratching on how to get the thing going, a few random buttons and leaves were pushed and pulled and the thing leapt into life.  There then began the competition to find the biggest bit of wood to through into chipper to see what would happen - the chipper was very chipper and coped with everything we had. 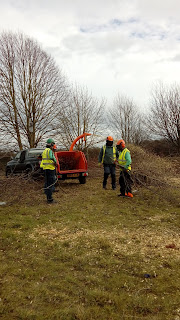 Clearly this was a bit of a different activity for our volunteers, involved in the first meaningful step of 1B restoration and working alongside Gloucester Highways, Amey, Geotechnical and of course SDC is a sign of things to come for anyone wanting to be involved in getting the Stroudwater Navigation Connected. (Now - Cotswold Canals Connected....ed.)