5 and 2 halves today. Bob, Mathew, Duncan, Andy and Julian were joined later by big Steve C and big boss Jim.
Plan B had been hatched and the pipe that took so much effort to push in place on Monday came out with a few Bob tugs. Maddening. The bend was assembled with a 2 foot piece of pipe and dropped back into the trench box with the SBD, now having more room, pushing the pipe into place. Easy. The really nice piece of worktop, covering the end, did not survive though. 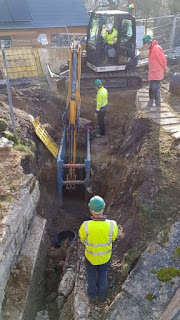 Ratchet strap threading is not our forte as 3 tried on Monday and 3 more today, so relieved the diggers are better performers.  Moving the trench box with BD was next-a doddle and it was swung into place and pushed into the gap leaving the new pipe end safe and secure.  SBD back filling in harmonious unison from the 2 well oiled machines and drivers. 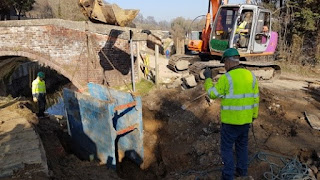 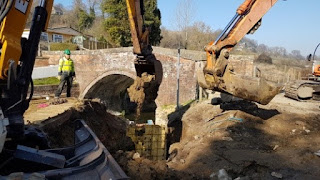 The SBD was inched forward and was able to reach beyond the trench box and excavate the next section, to the corner.  However the Ambury canal connection was too full and let water back into the trench.  No one was keen to pipe fit under water-strange that.  We needed a dam. How about a 1 tonne sand bag. No problem and it was swung into place and dropped into the gap. 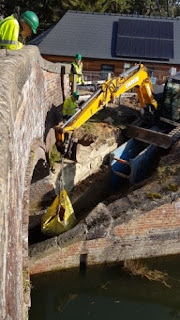 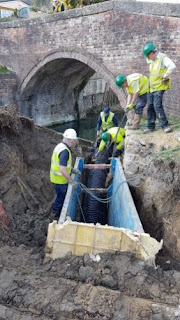 Then the bucket water baling helped drain the pipe side of the trench. The SBD scooped, pushed and pulled the gooey mess out of the trench with Bob the mole doing the final hand digging, but he did get stuck in the gloop several times. 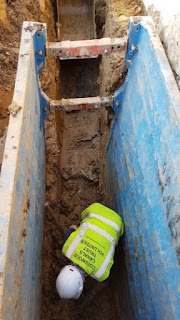 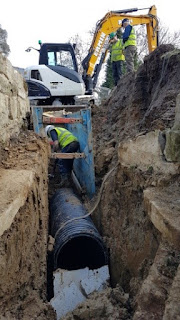 A length of pipe was lowered and pushed into place by SBD. A quick tidy up as it was now getting dark. A good day in the sunshine with the Ambury connection looking rather splendid. 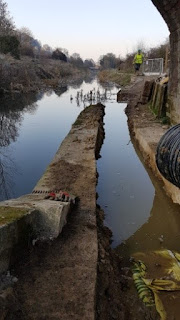