Ham Mill Feb 18th 2019
by: Andy P.
I have never liked returning to work after a holiday but Monday was probably one of the worst.  I do not know what it is about Ham Mill and land slips but we arrived to see that the wall down the old tow path had slipped almost into the trench, that had been dug for the pipe. Lots of d and f words.  Numerous emails had already been flying around but the scale of it was bad.  I am sure Sir Doctor Hindsight (SDH) will have a field day. 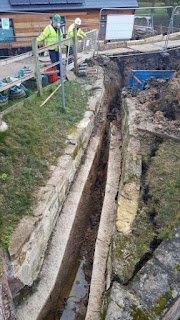 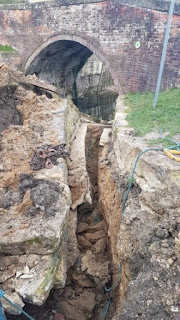 So another challenge for the gang of 8. Duncan went to retrieve the BD-ah but it was trapped on the wrong side of the canal so he had to rebuild the causeway to get back over to help dismantle the collapsed wall.

In the meantime we entered the Somme trench, protected by a hefty trench box to hand dig out the solid mud. Buckets were lowered and filled and lifted out as Kay added the spoil, to the Somme sculptures. We finally, after several rotating hours reached the water table which allowed us to assess the pipe levels. All part of the punning clan! 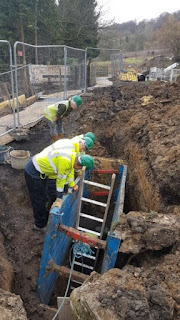 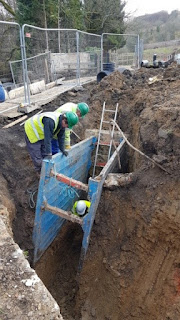 The mole award of the day going to Jason and his funny bone.
The BD slowly lifted out the wall stones which were all carefully placed in a chosen spot ready for the rebuild. 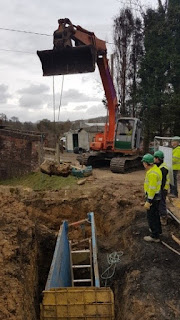 Then began the task of digging the trench deep enough, without undermining the other wall side, to accept the new pipe we wanted to fit. This took a long time with lots of finger signalling going on.
We had several important visits during the day from designer, engineer and the big boss.  We are grateful for their contribution and support as it was confirmed that the bridge itself would not fall over and a revised plan was established to rebuild the now disappeared supporting wall.  It’s worth noting that no one was hurt or injured and there were no serious risks.  Everything is being done in a considered and controlled manner, despite things seemingly conspiring against us.


The pipe was cut and cut again and 2 bends fitted and tried, first in the trench and then assembled up top with the help of the mini digger straps.


The part length pipe was put in place and gently squeezed into place by bucketless BD. Now for the 2 bends.  'Lets use BD again' was the shout, so late into the evening it was all in place.


The final act being to drag the trench box over the new pipe end to hopefully stop anymore land slippage. 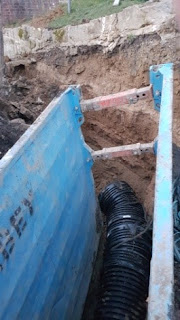 Our neighbourly neighbour appeared with a spot light so we could see to refit the BD and move it to a safer place.  It was late and dark, very dark.

Thanks to Bob, Jason, Kay, Monday Maurice, Duncan, Andy, Richard and Matthew (also for the blog in my absence) without whom, the day would not have been so fruitful.  It’s downhill all the way now.


No time for SDH thinking, other than we should use the proper kit and for certain jobs work more than 2 days a week to finish things off.
Posted by Peter Asquith at 11:11