Today yard was as slow to come to life as the day itself. The low cloud which obscured the blood moon during the early hours of Monday persisted into the dawn dashing any hope of seeing the receding lunar eclipse in the time between the siren call of the alarm and the fullness of sunrise. Driving to WD through sunrise is always a differing pleasure, will I be able to see the foothills of the Cotswolds through the mist or will the hilltop trees be etched into the horizon by the barely seen sun?


The ragged start was reflected in the slow increase in the number of volunteers arriving on site. The task list for the day required drivers to go to Ham Mill and Dudbridge on simple but separate jobs. Fuel had to be delivered to the tugs at Ebley requiring a trailer proficient driver. But wait, a phone call from Ham mill. The job needs a trailer to be moved and the nominated driver isn’t qualified. Oh! And by the way can someone go to Gloucester to collect a mixer that Jason has obtained. It will need a trailer to collect it as it is very heavy and can’t be lifted like the others we have. Reg is juggling tasks and drivers until he has to leave for a meeting at 10. It all worked out in the end but it required goodwill and the use of more than one personal vehicle to meet the early day tasks.


Our tasking ultimately comes from Peter Best, Chair of the Stroud Valleys Canal Company. He is takes an increasing interest in the appearance and maintenance of the restored and watered lengths of the canal. He takes time to walk his parish and passes on to WD his observations and tasking for work to be done. One of Monday’s tasks was to follow up on some of Peter’s requests by visiting the sites on his current list to better understand the job and how many volunteers would be needed to complete the job. Jobs at Ebley and Harper’s field will be programmed for the near future.


Whilst I am on the topic of jobs to enhance the appearance of the Stroudwater I must offer a peon of praise to the Wergies who had their Christmas camp with us. Over 6 days a large party of the Red Army, never less than 30 and ultimately 40, set about clearing the banks west of the A38 roundabout. Getting as far as the site of the old aqueduct beyond Stonepitts Bridge a large number of overhanging branches and trees were cut down and were either burnt or taken away as fire wood. Vast amounts of brash and undergrowth were strimmed, cut or mashed and added to the growing number of bonfires. Jasper and Stuart, the two WD built work punts were used to great effect providing stable platforms for the chainsaw teams to work from and to collect loose timbers from the water. I thoroughly recommend a walk from the roundabout to the river bank and back to see what the canal can be as Phase 1B progresses. 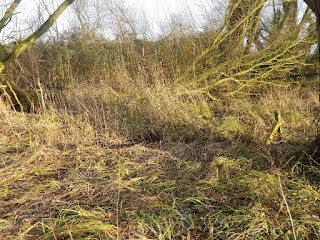 There is water in there somewhere…

A before picture from the western end of the section crossed by Stonepitts Bridge. The fallen large tree is on the off bank. To see the ‘after’ picture why not take a walk from the A38 roundabout along this section. 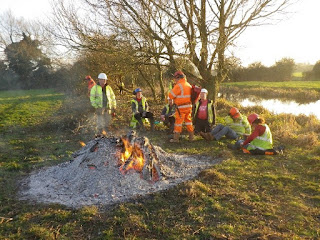 The end of a very productive day!
Posted by Peter Asquith at 07:42