A really cold start, for the 7 of us, but it did allow the mud to be walked on for a change.  The Mini digger and trailer had to be rescued from where it was left or rather dumped by the last users.


Duncan, after lots of greasing, finally started digging out behind the non retaining wall and creating space for the other temporary tow path along the lock side.
The spoil being dumpered away-sorry the only place left was to put it in the canal. 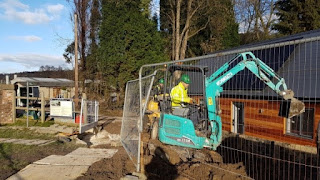 Jason, on big digger, began clearing the canal where the 2 dams were, in order to allow a boat to pass towards the bridge.  A new temporary career for the boat has been agreed.  Fuel has to be manually carried over to the now trapped big digger. 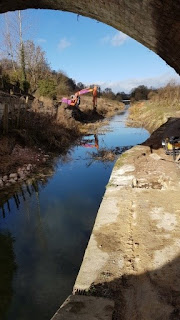 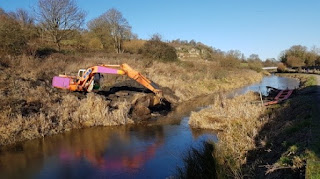 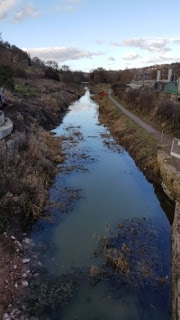 It’s a long time I suspect, since the canal looked so open. Looking good down towards Griffin lock

Maurice, Richard, Mathew and Andy found rails which were cut, spliced and screwed onto the temporary tow path posts.  The towpath under the bridge was blocked off at both ends and suitable signs put in place.  Then Bob set about cutting 2 grooves along its length and up the slope to mark out where the overflow pipe was to go.  Then the jack hammer made an appearance for the rest of the day.  It being used on a shift basis, to break up the concrete which was carried away in the mini tracked device-this seemed to have a mind of its own on occasions. 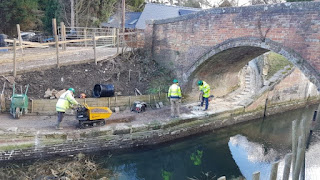 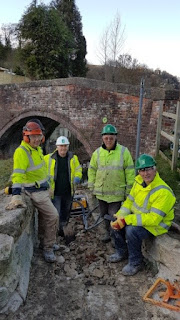 Dave and Rich arrived with the last piece of pipe and went off to get us much needed fuel top ups.


They then set off down the track to Griffin lock but the famous now gooey mud, refused the let the tipper past.  So all hands were called to push it along its way. 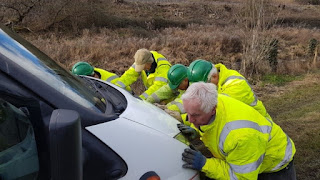