I had a surprise last Wednesday when Peter said "I may not be there on Monday, so you are in charge". Gulp... Err... Management... How hard can it be?

The plan was to continue the clean out of the bilges and perhaps take out the old hydraulic tank that was mounted midships.  Now it is the nature of these things that you can never remove one item without taking out several other things and pretty soon the cabin floor and its bearers had been removed to allow the tank to be turned through ninety degrees and tipped over. 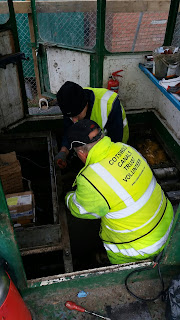 The resulting space allowed us to get in and review the vast array of hydraulic plumbing lurking under the side decks. Much time was spent tracing pipes and trying to remember which ones had been disconnected from the control block and work out those that had been unused for many years with the various changes in the dredger's configuration over its life.  In the end, most of the plumbing was removed with only two feed pipes left in place, though their future is also in doubt depending on where all the components are mounted. 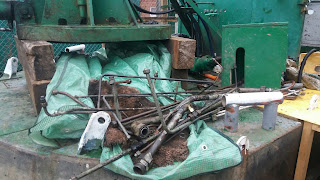 Meanwhile in the yard, John and Gill were reclaiming the unused fuel tanks, cleaning the insides and painting the outside in red oxide. 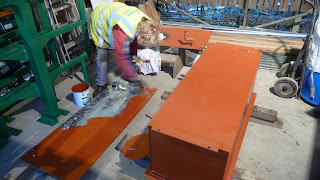 In the workshop, Ken produced a bush that will allow us to accurately drill out the sheared bolts in the slew ring of the dredger's boom.  A task for Wednesday.
With time left over all the remaining wiring was removed.  Most of this will be replaced with a new loom that comes with the engine.