The day started quietly. Another white board to do list would keep Bob, Duncan and myself busy.

First quick job was to level off the soil on the bank using the big digger. However a gentle bucket kiss to the corner wall was fatal.  It cracked and dislodged the block work. Annoying, really annoying.  Will need rebuilding and then refix the fence panel.

Ron and Harry arrived and set about big digger soil moving onto the bank, to help support the now broken block work. The job being made difficult as 2 large trees prevented easy access.  Lots of support shovelling was also needed to get the slope correct.  Several trees were up rooted and replanted.  It now looks a lot better.

Mathew and Richard arrived and began constructing the fence by the bridge steps.  Another post was cut and installed to support the rails.  Buffers arrived in the tipper with a supporting box of screws.

Bob was in the by pass hole and having to cut every brick, often at several angles, to make the top courses level, so the coping stones would fit. A really challenging bit of work.
As the tipper was on site, we went to Brimscombe to collect the last few bricks and to identify suitable coping stones.  Some stones to be cut but still needed a 3 man lift.

Lots of scrap metal was taken from Ham Mill back to the depot-still quite a bit left.  The 1 foot diameter tree stump, that heavily defeated the big digger, began to reveal itself as it became apparent it was in the way.  The mini digger small bucket nibbled away around the 1 metre+ stump. 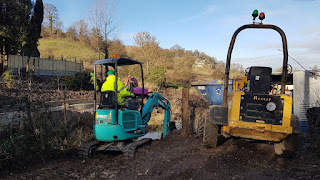 A borrowed big axe rota was set up to chop around the exposing roots.  A few minutes chopping, with the just enough time to gather your breath, before your next turn. 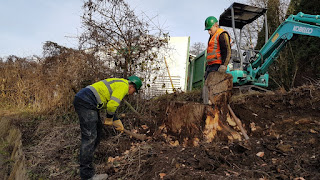 
The substitute chain saw is being warmed up.
Posted by Peter Asquith at 17:22