I read that other volunteers may be slow starters in the cold and are fed on jammie dodgers.  The frozen foursome this morning were at it by 08:15 after a diet of foxes specials and chocolate hob nobs.  It was mighty cold but we could spend all morning walking on the mud-did not try the canal water this time. 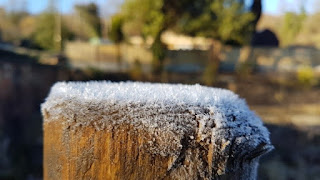 Bob started by cutting some pointy bits on the bottom of the sheet piles. Note that these are proper big sparks. 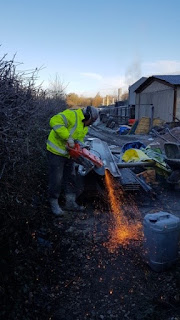 The dumper was fired up ready for some external maintenance and repairs.


The temporary (1) sloping tow path is now in full time use but folks still get a bit lost sometimes.


Duncan, Mathew and Andy began on the temporary (2) canal side tow path. Temporary (3) posts were knocked into place with the 2 man post basher.  Then temporary rails (3) were cut and screwed in place.  Then temporary (4) trench boards were fitted into the temporary (5) hole behind the non retaining wall.
Dave and Rich returned the mini digger, from engine lifting duties, where it continued to level off the new temporary (6) tow path by the lock. No matter how many times if was levelled it always sank some more when driven over.
I was nice to see Mike and the bench fitters and have a quick catch up.
We quickly broke up the remaining, what has turned out to be the temporary (7) concrete ramp before the jack hammer was returned.
The original temporary (8) lock side trench boards were moved to their new temporary (9) position alongside the fence. 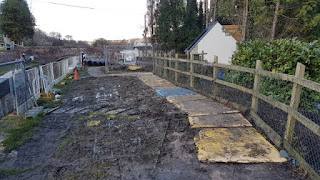 The temporary hole (5) was filled in to form a new temporary (10) level surface to meet up with the other temporary trench boards (9) shortly. 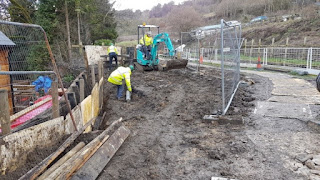 A temporary sort of day but it’s all part of the plan and the mud won again despite the canal still being frozen on the way home.
Posted by Peter Asquith at 17:55