Firstly, happy new year to you all.  At least the sun shone on our first day back, although No.5 was well coated in sparkling frost when we arrived.

Today's efforts targeted two areas.  The bilges were still deep in a mixture of oil, water and crud, so that was the primary job.  Secondly, the two fuel tanks were inspected internally. 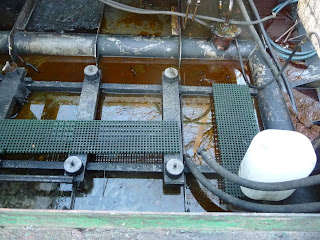 The grunge in the bilges was attended to using a selection of methods.  The previous process of pumping the fluids into a large tank and letting the oil/water separate had worked well, so we did a bit more of that.  This method only worked to the point at which the bilge pump gave up due to low fluid level.

So, we concocted a system which could suck the grunge up using a vacuum cleaner, a large plastic bottle as a separator and a small hose at the sharp end.  This worked quite well for the water and light oil, however, when the brew approached that of heavy crude, it too gave up. 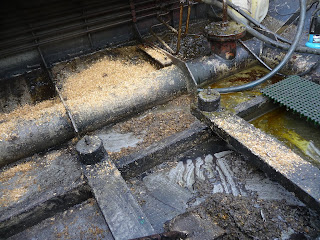 This then called for another attack using the copious supplies of wood shavings from the chippies.  Sprinkling the remaining areas worked really well and a sludge could be created that not only stayed on the shovel, but also left the treated area clean and dry.  The waste was then suitable to put in a bag. 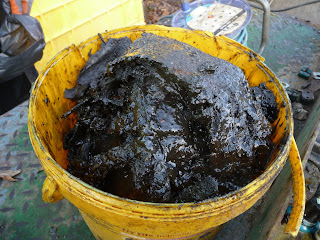 Most of the bilge was cleaned, there is a bit more to do under the cab area.

In the yard, where the two diesel tanks had bee taken for safe keeping, the task of undoing the numerous screws that secured the flat plate lids on began.  Eventually, we were able to see clearly into both tanks.  The Port side one still had a small amount of diesel in it and was generally quite clean.  The starboard tank looked like it had not been used for some considerable time and had a much thicker layer of granulated size deposits coating the bottom, together with more rust under the lid. 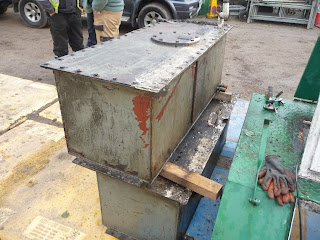 Both are now ready for a full clean and repaint before being put back into service.  The old plastic diesel tank has now been disposed of.

At the end of play we gathered all the hydraulic hoses together for safe keeping.  It is hoped to redeploy some of these in the up and coming rebuild phase.
Posted by Peter Asquith at 18:07