The Ryeford to Oil Mills Pound

After a long Christmas Break, the Wet dredging team started up again to continue clearing the accumulated silt and old tip material from the Ryeford to Oil Mills pound. Dredger Patricia is now in the process of gaining full release from her trials.

This has taken longer than we would have liked, but doesn’t everything?
Today after the Tug Team bought along a hopper for us, we carefully manoeuvred Pat to a position where we could more easily get at the mud, settled in the spud legs and began dredging. With Bob H. the instructor in charge, Richard F underwent a long stretch at the controls. He looked quite pleased and proud after his spell at the levers (and so he should!). 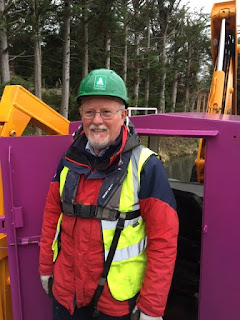 The result of his Richard’s efforts are in the hopper alongside. Please note, most of the water was already in there, we’ll pump it out when the hopper is nearer to full. 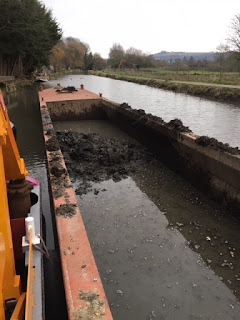 A lot of people think that all we do is to sit in the seat and pull or twiddle levers. Far from it! Dredging is an involved series of activities. The range from deciding where to dredge, how and where to dispose of the muck (with all it’s regulations), maintenance of the plant, learning how to operate the plant and the qualifications required. We also require knowledge of Invasive Non Native Species, fish and wildlife protection requirements and their controls.
Above all this is the fundamental requirement of safety of the Volunteers and Public.
"May all your combined leaks never exceed your bilge pump capacity.
Posted by Peter Asquith at 21:02