Our new tug Margaret went grey today. Not from age (she's only 17!) and not from worry – but because she had her hull shot-blasted.

The shot-blaster arrived this morning.  His first job was to hang sheeting all around her, to contain the debris that would be generated by the shot-blasting itself. 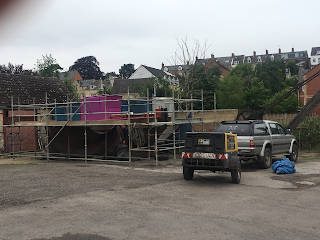 (the sheeting is visible inside the scaffolding, below the purple cabin)

The actual shot-blasting is very much a one-person-only task, and we wouldn't have wanted to be inside the sheeting without very substantial PPE, so (after a quick look at progress during a short interval) 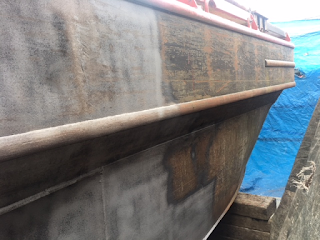 - we left the shot-blaster to get on with it.
He doesn't actually use shot, but rather ground up recycled glass bottles.  At the end of the process, we had a good layer of sand-like glass under the boat (and presumably inside it too! We'll find out later). 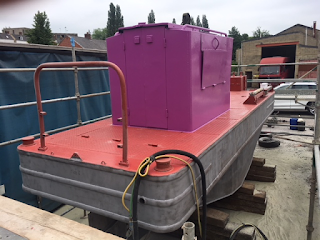 The result was outstanding – a beautifully clean surface ready to be painted with 2-pack epoxy paint. 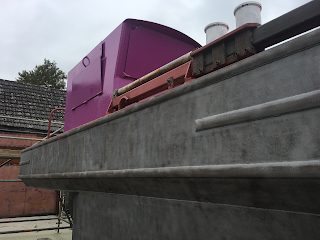 This paint comes with a good selection of safety warnings, so the team donned their protective gear – overall, gloves, more gloves, full-face safety visor – mixed the paint, the activator and some thinners, and started painting.  Our thanks to Hempel for their support in supplying the paint. 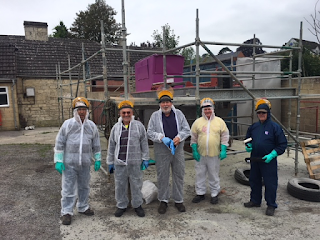 Four of the team started at different points around the hull, and progressed clockwise until they reached the next person's start point.  The other 2 concentrated on the awkward bits – joins, cavities, edges and so on. It took a little over an hour to complete the task, which resulted in a much improved appearance. 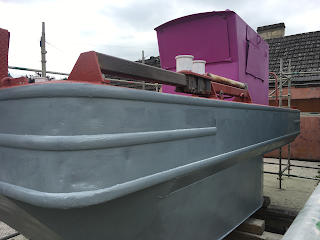 The next step is a second coat, this time in black, and that should happen early next week.
You may also recall that in an earlier blog, we mentioned a broken mount for the hydraulic pump. Well, earlier this week, we removed it. 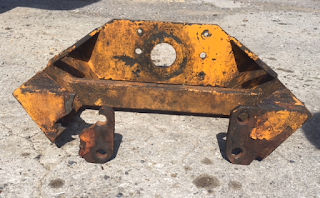 The picture shows the left hand mounting separated from the main body. It's now at WD, awaiting a repair. At the same time, we plan to add an extra couple of mounting points, which we hope will prevent a recurrence of the problem. We hope to refit the repaired item in a couple of weeks.