Dredging end of May to the 7th June

by: Andrew Rendell
We need to thank John (as wet dredging leader stand-in whilst AR and BH away) plus the few dedicated volunteers from the Wet and Dry dredging teams and a couple of tug team members, for the last week in May, doing some difficult tidying up in the canal where years of builders rubble and cut down tree limbs were blocking the offside of the canal. 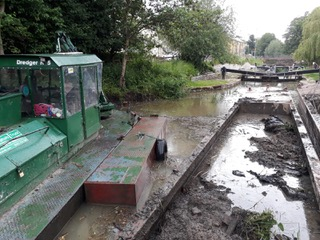 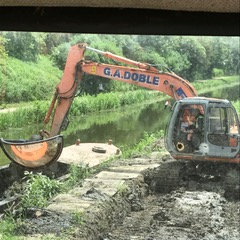 The first 3 days in June (Mon - Wed) we have generally finished the Stanton to Bowbridge Pound. although not all as we want depth, width, and perfect offside profile we have made it navigable.  Andy J now a newly trained dredger operator for Augustus and 3 at present in training.  Will need a few more as year progresses with Patricia coming on line soon.

Thursday afternoon Andrew and Ron tried a new method at Griffin end of pound, it was conveyer belt style.  Dredger loaded a bucket or two of silt from towpath side into hopper and Ron in the long reach took it straight out to bank, why you ask, the long reach couldn't reach the tow path side of the canal. so busy and non stop action no time for photos so look out next week. 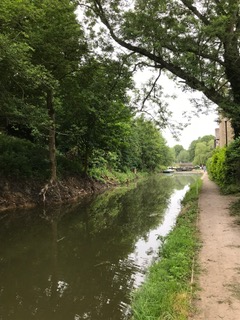 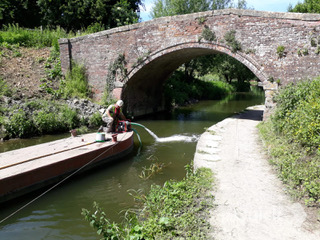 Tuesday, finally Jasper arrived and Bowbridge Lock was opened temporarily to allow Jasper through and Weedie out. Now locked again till the whole pound is finished hopefully end of June.
Surveying for Bowbridge to Griffin dredging report
With some volunteers making up a survey team, will hopefully on Tuesday 12th do a fast survey first to give the dredger team info on any major spots not dredged well enough (if you can help contact Myron or Tony J).  Then, at the end of the month do a comprehensive survey of the whole pound to identify  data for future work. 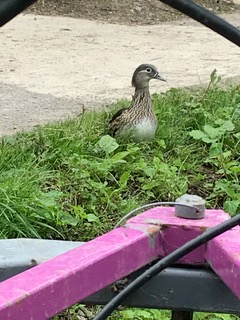 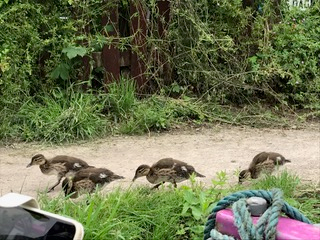 The wild life including ducks, fish and birds is on the increase and has given much pleasure to the teams and members of the public.  If you haven't been to this part of the canal in the last 4 months its well worth a look, another fantastic change and progress to the Stroud canal section.
We are on target with the new target of getting to Griffin Mill Lock by the end of June opening another big part of the canal, but Andrew still needs support crew to complete on time. 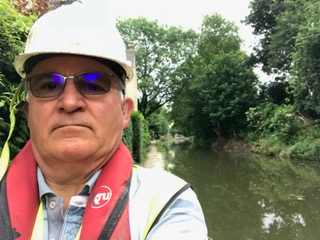