Wow, what a great day.  The morning kicked off in the usual way, but very soon we had the pleasure of our estranged Team Leader, who had popped back from his eternal holiday to make a state visit to site.  There was much to see - but also so much more to be missed Bob....

The rudder is now sitting securely in its new bearing, together with the gland packing clamped in place and the actuator connected.  Our prop' also sports a '3-Phase' recognition of our well bronzed Team Leader. 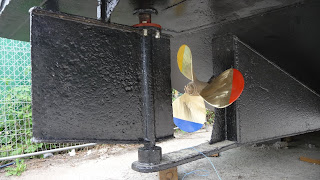 Up front, the ladies were in full flight painting the white hand rails, the engine room air vents, followed by the internals of the control and the welfare cabins.  They are really starting to look quite smart now (the cabins, that is!).  It was a busy work area with the wiring of the bilge pumps also in progress. 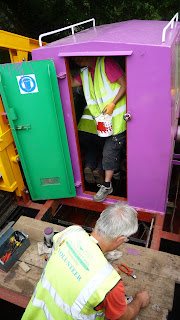 The main jib cylinder required fitting.  This is a very heavy lump, but careful checking of the pins, surfaces and extension permitted a relatively straight forward installation followed by hydraulic hose connections. 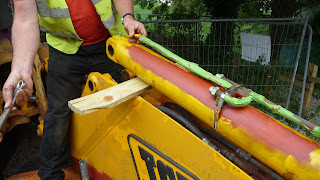 All of the spud leg pins also received their retaining washers and split pins, as the legs were to receive their first exercise for quite some time.

As lunch time approached, we extracted two drums of hydraulic oil from the store and set about putting 50 litres into the tank, in readiness for testing.  A systematic inspection of all the hydraulic joints was made to ensure all had  received the attention of at least two spanners.  The control lever console was manoeuvred into position and bolted down.  Lunch was then taken. 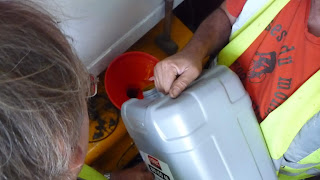 A short discussion followed after we had been fed and watered, to map out how and what we were going to test and in what order.  We did not want anyone getting in the way, especially as we hoped that there would be the movement of much metal.

The engine easily fired into life and an initial inspection of all the hydraulic joints revealed no problems.  Then, one by one, we set about exercising each of the controls over their limits of travel to check operation and to look for any issues.

Firstly, the propeller motor was run.  This was then followed by each of the spud legs and then, finally, the jib actuators.     It is pleasing to report that each step ran very smoothly with no faults or issues.  The only uncertainty is whether or not the jib controls are mapped for JCB, ISO or HLM!  We will need to check into this next time.

Not content with having trundled past this mighty milestone, we filled the hot water system for the first time, connected the radiators, opened the valves and span up the pump.  With the engine having been on for half and hour and settled at about 80 deg C, it was not long before we had heat in the rads.  Again, we checked for leaks and there were none. 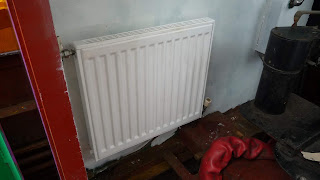 See - just how hot this radiator is!

To celebrate our many successes and a most rewarding days effort by all, we clinked the quality Western Depot porcelain and had a toast to Patricia with a fine cup of tea!
Posted by Peter Asquith at 20:53