It’s Not Just Boaters Who Use The Canal


A warm night lit by a bright full moon in a cloudless sky slid effortlessly into an equally cloudless, brilliantly sunlit, day.  And it was hot.  By 11 o’clock it was uncomfortable and by lunchtime being outside in the yard was almost painful. Paint was drying almost as soon as it touched the hot metal surface it was applied to.  No-one had and egg to fry on the roof of any of our storage containers but wagers were considered for how long it might take to cook.


The sub text to this good weather which started early last week was this is a fallow year at Glastonbury.  And Glasto always portends heavy and persistent rain for one or two days during the festival.


The place to be was beside the water where the bankside trees cast dappled shadows on the water and the towpath.  The cool waters of the canal are rippled by the a gentle breeze which were we standing on the coast would be a sun driven sea breeze as the heated land draws in the sea cooled air across the beaches and headlands.


The sight of a fire engine drawn up in an unusual place will always attract attention and today was no exception. An appliance from the Gloucestershire Fire station at Stroud was parked on the old A419 at Pike Lock. The crew were apparently looking for a quiet place to rest but when joined in conversation said they were looking to do some water rescue training.  The cut would be ideal as a place to refresh their technical training before going onto moving water for another session.


I watched as the team from Black watch laid out two hoses, coupled them together and formed a loop for the casualty to grab on to.  The knot in the securing rope was described as 5 round turns and 9 half hitches – “it won’t come adrift, honest guv”. 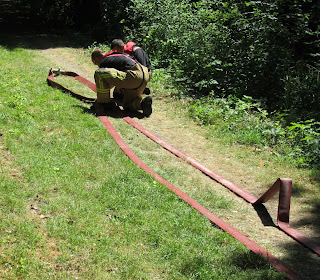 The hose was inflated to 2 bar and then manhandled to the waters edge.  The loop was cast afloat and using the remaining length of the hose directed to the off bank.  The active and conscious casualty would then be instructed to get inside in the loop, to then be drawn to safety. 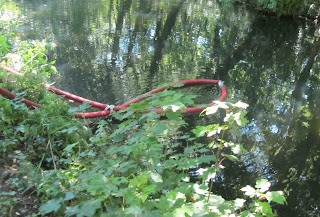 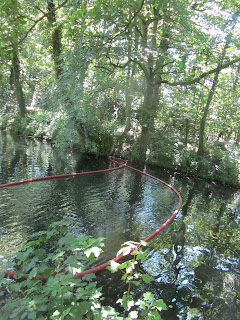 If the casualty is less responsive or agile – as a cold casualty might be – a single sealed hose would be deployed.  A loop formed in one end of the inflated hose can be floated to the casualty.  By twisting or rolling the hose the loop can be dropped over the casualty for them to grasp whilst being hauled to safety. 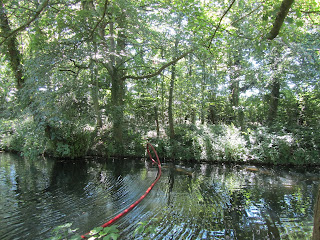 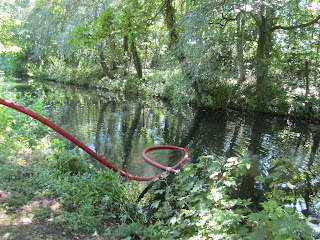 There is a serious point to the exercise today.  The water in the canal is still very cold just a few inches or centimetres below the surface.  The shock effect of the cold water on the unsuspecting individual is debilitating and disorientating.  It does claim lives every summer.  All too frequently it is not just the foolhardy but also the well intentioned who fall prey to the effects of cold shock in water.


As with all rescue services Black watch hope that they never have to put this training to use but will be ready when they are called on.
Posted by Peter Asquith at 07:50